Had another full-day field trip, this time heading down to Suffolk County.

Started off at Bury St. Edmunds, which was once one of the richest Benedictine monasteries in England (we had a guest lecturer on monasteries the previous Monday). It was destroyed in the Dissolution of the monasteries in 1539, but you can still see many ruins from where the buildings once stood, as well as two of the remaining gates and the current church. 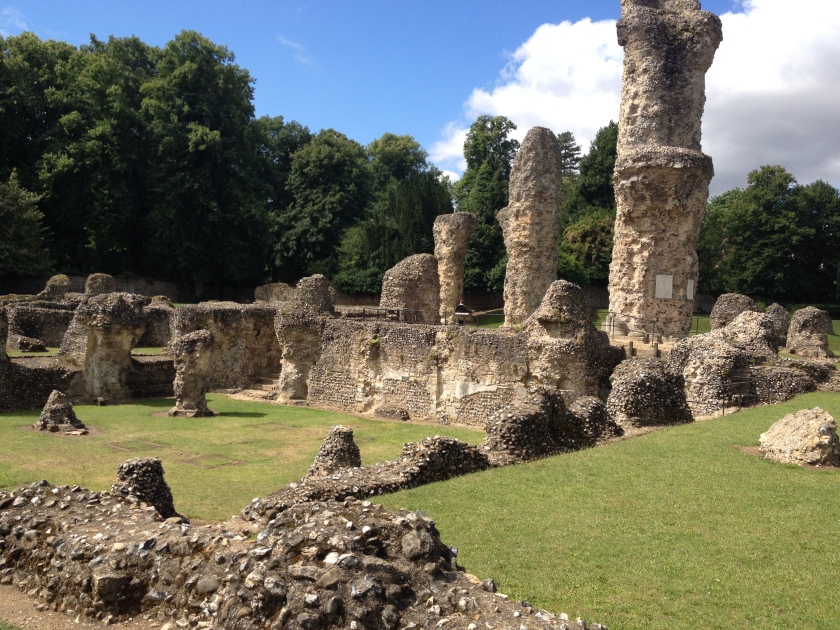 Next we went to Sutton Hoo, which is the site of burial mounds that were found to contain an undisturbed ship burial and a huge amount of Anglo-Saxon artefacts. The burial mounds were uncovered in the 1930’s. Most of the artefacts are now in the British Museum, which I saw when I was in London, so it was very cool to see the place where it all came from.

Burial mounds at Sutton Hoo (would have been much higher originally, before the excavations):

Our final stop of the day was Framlingham Castle, an unusual castle in that it has no central keep, but instead just a wall with thirteen towers to defend the centre of the castle. You could walk all along the top of the castle wall.

This castle played a role in medieval times and was also used by Mary I in 1553, when she gathered support at Framlingham Castle before moving on to successfully seize power and become Queen of England.