Day 3, we set off from Cork for our first stop of the day: Blarney Castle.

We got here early and were some of the first people in, so naturally we raced to beat the soon-coming crowds at the lineup to kiss the Blarney Stone. After a short climb up a very narrow spiral staircase, and a short wait, I kissed the stone! Kissing the stone itself was an odd experience – you have to lay down and then lean far, far back, while a guy supports you and makes sure you don’t fall to your doom. But according to legend, I now possess the gift of the gab, so it was worth it.

After kissing the stone, we spent some time exploring the castle and grounds, which were quite lovely. The grounds included a poison garden, caves, the old dungeon, and a fern garden with its own waterfall. 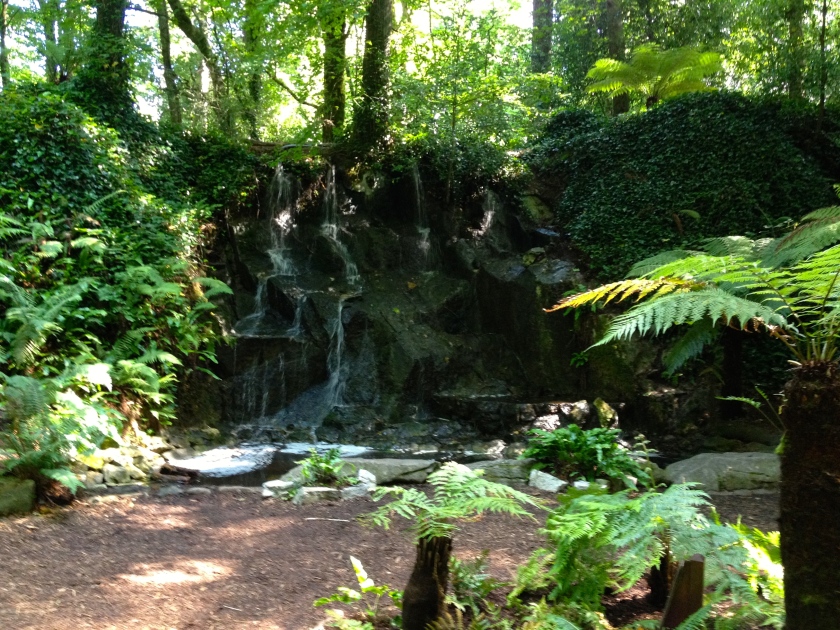 Next up was the drive to the Cliffs of Moher, which were seriously awesome. They’re the ones that appear on so many the desktop backgrounds and Ireland travel pictures, and you know they’re going to be good, but you don’t expect how incredible they are in real life. We only had two hours there; some of our group went on to the gift shop and cafe after seeing the cliffs, but I literally couldn’t take my eyes off them. They were seriously so, so beautiful, from all angles. I’d go about ten feet and then stop and admire the new view of them. Had a good, long look, but still could have spent all day there, looking at the cliffs, the way the light hit them, the sea birds circling around, and the waves crashing below.

We finished off the evening by driving on to Galway. Here we had a short walking tour from our guide before splitting off for dinner. Our whole group met up again later that night to enjoy more live music and drinks at one of Galway’s many lively pubs.

“In the polar bear capital of the world, volunteers get a glimpse of the frontlines of climate change.” Check out this new article I wrote for Verge Travel magazine, on volunteering & environmentalism in Canada’s north. Inspired by the trip I took the Churchill in 2019 & the beautiful lights I saw there. 🌌 link in bio. #sustainthenorth #churchill #churchillmanitoba #northerncanada #climatechangeawareness #travelcanada #volunteertravel #travelwithpurpose #northernlightsphotos
Latest lockdown orders got you down? Take a virtual trip to the outback with me, as I reminisce about my road trip along Australia's dinosaur trail. Featuring loch ness monsters, waltzing matilda, and epic outback sunsets. 🦕 link in bio
Little known fact about wombats: they make excellent co-pilots. #havewombatwilltravel #wombats #queenslandroadtrip #queenslandtourism #queenslandtravel #travelqueensland #athertontablelands #outbackadventures #outbackqueensland #bananastand #australiaroadtrip #travelaustralia
Watched the movie "Into the Wild" last night and this quote from the opening stuck with me.
When I was travelling around in my car... every item had a place & every space had a function. My favourite thing was falling asleep watching the stars through the sunroof. It's hard to beat the freedom of pulling up anywhere and thinking, "this is beautiful... let's stay just a little longer."
Koala cuddle train.
...and are they ever beautiful 💙🐢#queensland #greatbarrierreef #seaturtle #greenturtle #capetribulation #oceansafari #capetrib #fnq #fnqlife #seeaustralia #thisisqueensland
Confirmed: Australian turtles do not speak with Californian accents... #queensland #queenslandtourism #findingnemo #greenturtle #seeaustralia #seaaustralia #thisisqueensland #greatbarrierreef #seaturtles🐢 #snorkelaroundtheworld #coralreef #beautifulocean #underthesea #likewhoa #gimmesomefin #justkidding
Pe-rry! This platypus surfaced in the water about three feet from where I was sitting, and as soon as it heard my camera *click* it dove back down. Swipe to see views from where I sat on the bank, from 5am on, waiting. #duckbilledplatypus #fernflatcampground #brokenriver #eungella #eungellanationalpark #nationalparksaustralia #queensland #australianwildlife #platypus #naturesmostcuriouscreature
Loading Comments...
%d bloggers like this: