Monday was our first day at the work site, and our first time meeting the fabulous Habitat for Humanity crew in Lafayette. On site there were several paid workers, our project manager, and many volunteers, all of whom were endlessly patient with us over the coming week as they taught us various house-building skills. There were three houses on site, all at different stages of development. I spent the first day in the house that was the most done, putting on finishing touches. With a team of three we spent the day painting doors, door frames, windowsills, and trim.

For lunch that day we were treated to a Louisiana special – red beans and rice, served with cornbread. This is a classic Louisiana Creole dish and the site workers told us that red beans and rice is always served on Mondays, although no one was sure why. A internet search now tells me that it’s because Monday used to be wash day, and people would simmer the dish while doing their laundry. As well, ham was traditionally served on Sundays, so leftover ham could be thrown into the red beans. It was pretty delicious, and also a treat to have a homemade, authentically local meal while travelling!

After work, we went out for a swamp tour at nearby Lake Martin. We arrived just in time to be the last tour of the day, and the sun was setting as our guide took us around the lake and bayou.

With the warm sun, several alligators were out sunning themselves on the north side of the lake, giving us some amazing views.

The whole swamp was absolutely beautiful. Our guide told us that Lake Martin is a relatively young swamp, with the oldest tree only about five hundred years old. As well, he told us that swamps are extremely clean ecosystems, and that if there’s that “swampy” smell, it’s because something else has gotten into the water or is disrupting the system.

Swamp sunset (photo from my friend Jen). These are Cypress trees, the state tree of Louisiana. 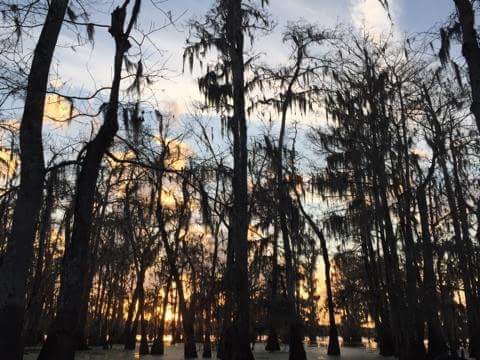 The tour finished with the guide taking us to look at an old alligator nest, which basically looks like a mound of dirt. He moved the boat about ten feet and showed us this year’s nest, which was teeming with baby alligators. Then he casually pointed into the water at a pair of eyes, floating five feet away from our boat, and said, “There’s the mother.”

After spending a minute to determine we weren’t about to do anything, the mama alligator moved away and hung out about twenty feet from our boat while we took photos. We were less assured after our guide told us that alligators can propel themselves out of the water if they want to.

Mama gator – you can just see her eyes and back in the water:

We got back to the docks just as the sun was setting – another full day done.

Sunset in the bayou (photo from Jen):