Wednesday was our third day of work. I spent the morning inside painting, and then at lunchtime we got a bit rained on.

One of the houses across the street from the worksite, the rain pouring down:

Luckily the rain cleared up by the end of our meal and we were able to move outside, working on the exterior details of the house and putting up corners.

In the evening, we had been invited for dinner with some of the University of Louisiana Habitat for Humanity club members. We met them at a jambalaya place and enjoyed some more local Louisiana cuisine.

Talking to the UL people was really interesting. We chatted about the weather, how cold it gets in Canada, and the accommodations Habitat provided for us.

When we first arrived, we were told by the Habitat coordinators that if we liked to run, not to run around the neighbourhood. It was recommended that we stay in our house and only go places by car. Despite this warning, our trippers had gone for a few walks around the area. We’d also talked and hung out with several of our neighbours, who we found to be really friendly.

One of the UL girls was shocked to hear that we’d been going for walks. They were also surprised that we talked to the neighbours, which apparently most groups do not do. On one level, I could understand their point of view, because we weren’t exactly in the nicest area. But personally, I found it really beneficial to be in the type of neighbourhood that  the people we were building houses for could be from.

One of the girls on the trip had mentioned something she had learned about on a previous volunteer trip, to an underdeveloped country: the “first-world bubble.” Though America is a first world country, I think that the principle still applies. As Canadians, we live in a place that’s pretty amazing, and it can be easy to forget that life isn’t like that everywhere. Especially as university students, living in a university town, we forget that there’s a world outside our own: where everybody lives in nice houses, has enough food to eat and free healthcare, and gets a high level of education. We’re all extremely privileged. But there’s a whole world of people with lives very different than our own. Those lives aren’t necessarily worse than ours – lots of people are just as happy with their lives – but a lot of people are also suffering, and many of them are looking for something better (for example, the people who apply to become homeowners through Habitat for Humanity). We have to remember that there is so much more going on in the world than our own lives and our own perspectives.

Our group outside the Jambalaya Shoppe. We’re making the UL sign with our hands: 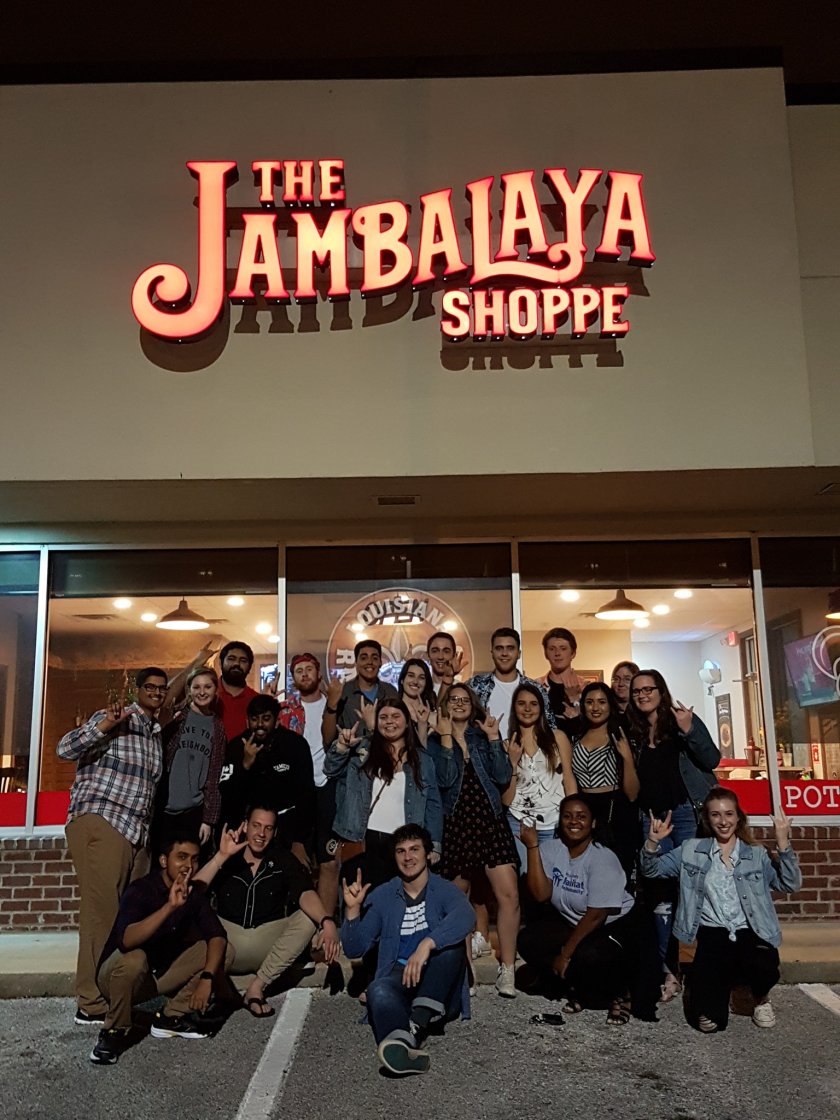 After supper, our group headed to the Blue Moon Saloon, where we enjoyed some local beers and hung out for a while before heading home.

At the Blue Moon Saloon: