Time for my next adventure – a trip into Canada’s north. I’ll be spending the next month in Churchill, also known as the jewel of Manitoba, looking at the northern lights!

I originally became interested in Churchill for its polar bears. Churchill is nicknamed the “polar bear capital of the world”. Located on the shores of Hudson’s Bay, polar bears come to the area in October and November while waiting for the ice to freeze over so that they can go and hunt seals.

I found out about an organization called the Churchill Northern Science Centre, which hosts learning vacations, scientists, and volunteers, among other things. I applied to volunteer in polar bear season and didn’t get in (it’s very competitive) – however, they suggested I apply for aurora season.

Aurora season takes place over February and March, and is supposed to be a time when the northern lights, a.k.a. the aurora borealis, are at their finest. Seeing the northern lights has long been on my bucket list, and luckily, I was accepted to volunteer at the CNSC! I’m here now in Churchill for the next few weeks.

The journey here was an unexpectedly long one. Churchill is a unique place in that it’s not connected to the rest of Canada by any roads. The only ways to get here are by plane or train. I opted to fly to Winnipeg, and take the train the rest of the way.

I boarded the train on Sunday afternoon. It’s a planned two-day trip, taking you from practically one end of Manitoba to the other.

Views of the river as we left Winnipeg:

Watching the sunset over Manitoba, the first night: 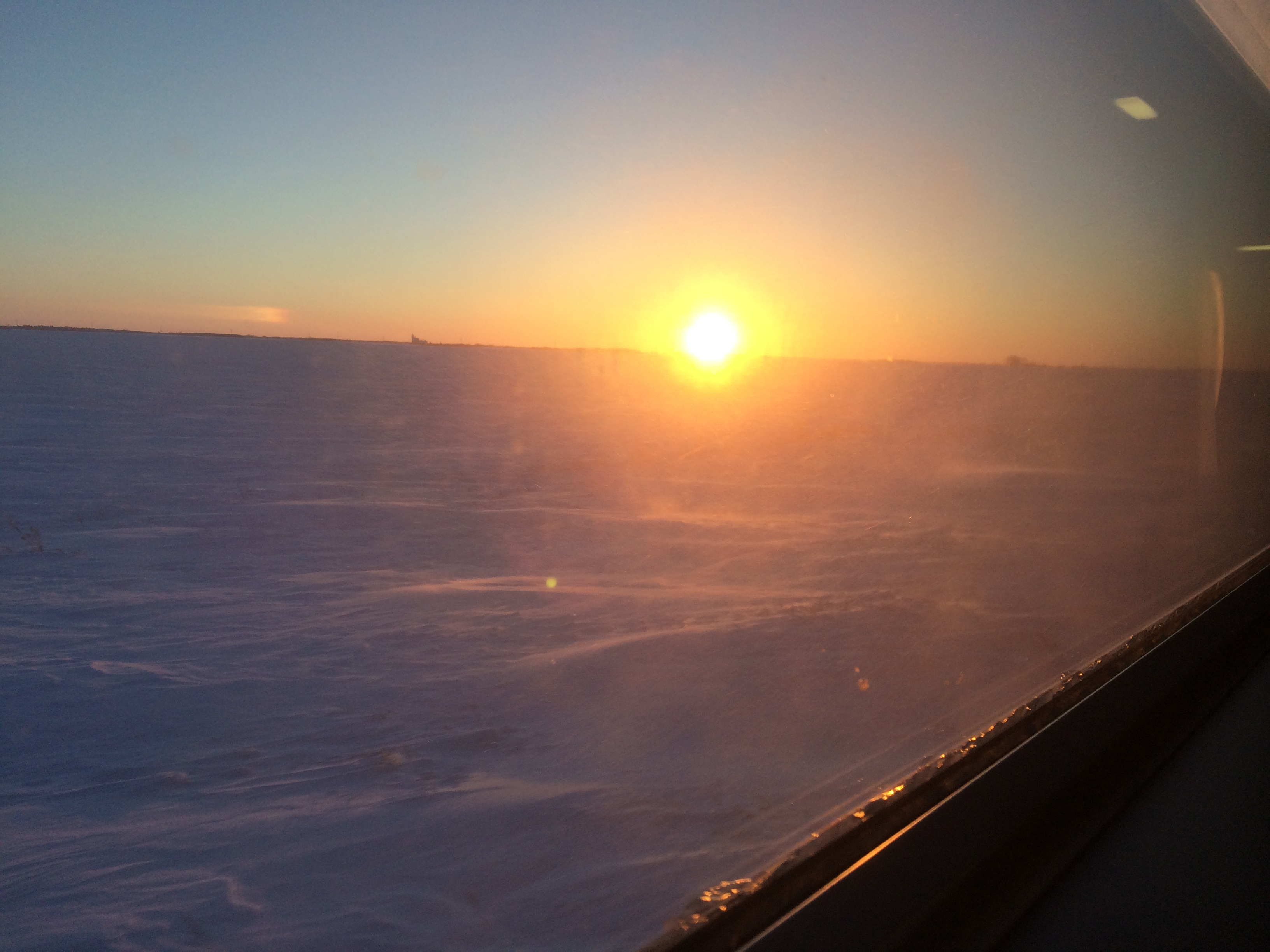 Enjoying the train ride, playing around with my camera:

A cute little town we passed:

We were supposed to arrive in Churchill on Tuesday morning. However, there were – as there often are, with Via Rail – delays.

By Monday morning, we’d only made it as far as Canora, Saskatchewan, and were stuck waiting for freight trains to go by (they have the right of way on the tracks). After twelve hours of waiting, Via Rail finally gave up. Our train was stopped by farmer’s fields, but we were close to a little country road. Via Rail paid for a bus to come and pick us up, on that country road, in the middle of nowhere, and bussed us back to Winnipeg.

Our train, stopped at the country road:

So, a day and a half of travelling, and I had made a big circle.

Via put us up in a nice hotel in Winnipeg for the night. I had a view of Downtown Winnipeg from my hotel room:

The next morning, they put us on another bus, this time bound for The Pas. We made it there in eight hours, had dinner in The Pas, and then got back on the train around ten p.m. The train left The Pas at its normal scheduled time of 2AM.

On my original train, I’d paid for an economy ticket (which gets you just a seat). Since we’d had such a massive delay, Via rail upgraded me to a berth. They also gave everyone free food for all of the days of delay, plus the rest of our train trip. At least they were on the right track when it came to customer service!

My berth. It was two benches facing each other in the day and turned into a bed at night, complete with a built-in reading light and thick privacy curtain. I felt so luxurious sleeping all stretched out, the train rocking me to sleep with the rhythm of the rails!

We spent another day and a half on the train, with a large chunk of time spent between Thompson and Churchill. This section of the tracks is somewhat precarious and has a speed limit of just 30km/h. Large sections of the rails were washed out in 2017 after snow melt from a massive snowstorm, causing severe damage and cutting off Churchill from the rest of the world except by plane. The train didn’t run for over 18 months, and only started up again last October.

Finally, Thursday morning, I arrived in Churchill – two days late, but very happy to be here.