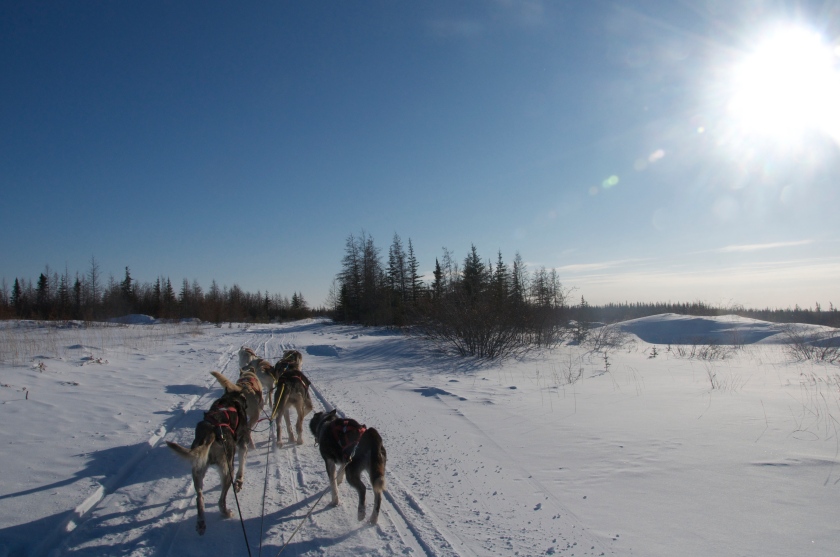 My first day at the centre I spent the morning learning about my role as a volunteer. Most of what I’ll be doing here is washing dishes (glamorous, I know). There’ll be the occasional odd job around the centre as well, but most of the volunteer work consists of dishwashing and helping out in the kitchen.

I learned the ins-and-outs of the kitchen over breakfast and lunch. Then, in the afternoon, we were sent dogsledding!

The CNSC is a non-profit that (as far as I have learned) serves many functions, including hosting scientists and researchers of Canada’s Arctic. They also run “learning vacations”, which are week-long programs aimed at giving people a chance to see the incredible things Churchill has to offer while simultaneously teaching them about what they’re seeing. The current session is on “Winter Skies: Aurora and Astronomy in Churchill.” The sessions include daily lectures, explaining the phenomenon of the aurora borealis and more sky happenings, and a variety of other fun activities. One of the perks of volunteering is that, whenever I’m not busy doing my volunteer duties, and whenever space allows, I’m allowed to jump in on these lectures and fun activities.

I have lucked out so much in that the current session, which has a capability of hosting 23 people, has only 5 people signed up. In other words – lots of space for me to join in!

The learning vacation group was set to go dogsledding on Friday. The train was initially supposed to arrive Tuesday, and the volunteer coordinator thought she would send us sledding on Friday as a treat after learning the job for a few days. Since our train was late, the dogsledding actually ended up being on our first full day there; luckily the volunteer coordinator decided to just send us anyway! 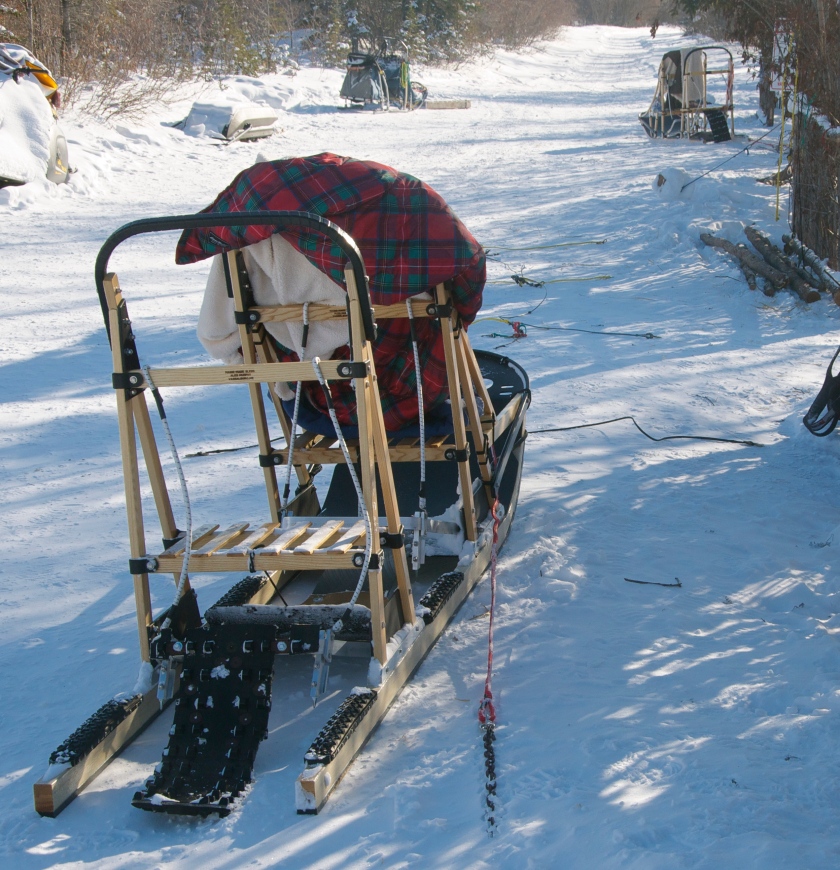 I had never been dogsledding before, but it was another thing on my bucket list that I’ve wanted to do for a long time. The centre took us out to Wapusk Adventures, and we started inside for the first part of our dogsledding adventure. Dave Daley, owner of Wapusk Adventures, told us all about his dogs, training, and the challenges of dog sledding in the north. He has been running sled dogs for many years, founded the Hudson Bay Quest, and once even dogsledded all the way from Churchill to Winnipeg – over 1000km through isolated forest, intense cold, and some of the most formidable obstacles nature has to offer  – so he had some pretty wild stories to share.

And next it was onto the sleds! They took us out on a short trip, called the “I-did-a-mile”. Even before the harnesses came out, the dogs knew what was up, and they were all excited to go. When the first team left they took off like a shot; they wanted to run so badly!

Photos from the sled. It was so cold that I just managed to grab a few shots before I had to put my mitts back on. 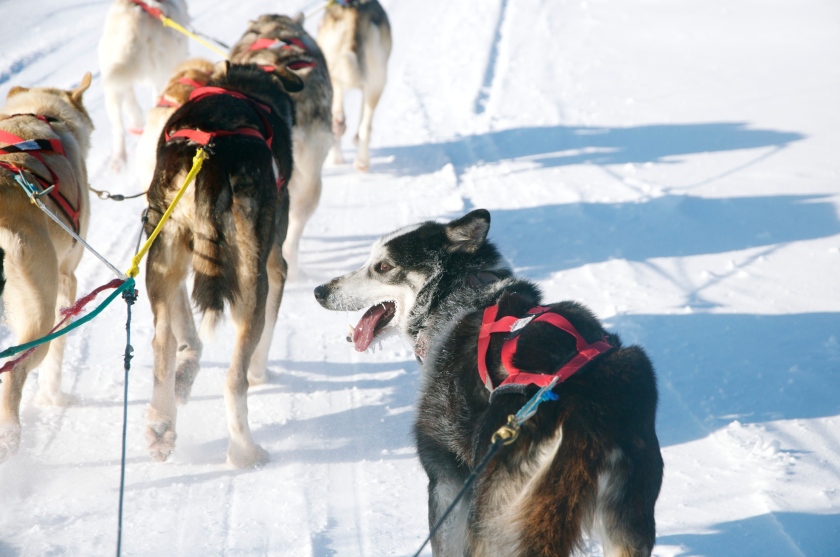 I’d dressed warm but after all the time spent sitting still around the dog yard and then on the sled, I was slightly stiff from the cold. I can’t imagine how people do such long trips, but I think that passion is probably a must.

Running through the forest: 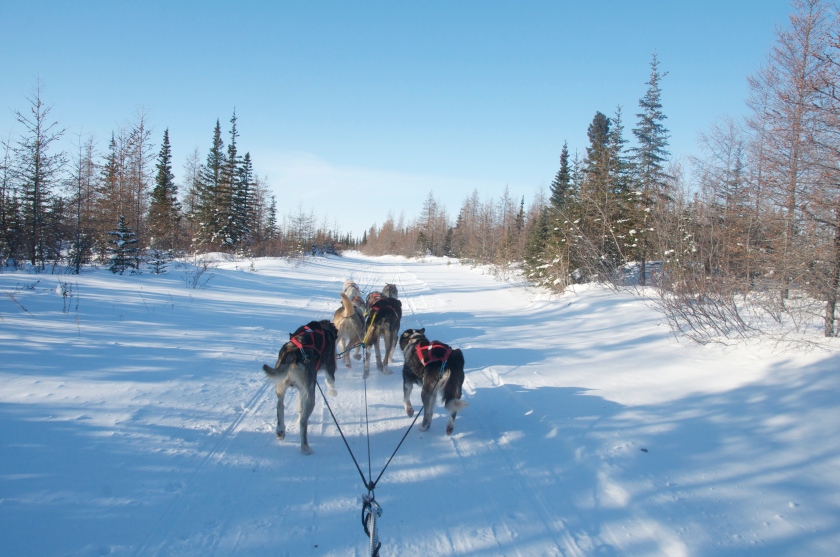 We warmed up with hot chocolates in the cabin, and spent some time hanging out with their litter of four-month old puppies. All of the dogs there were exceptionally friendly and sweet and just loved the attention. 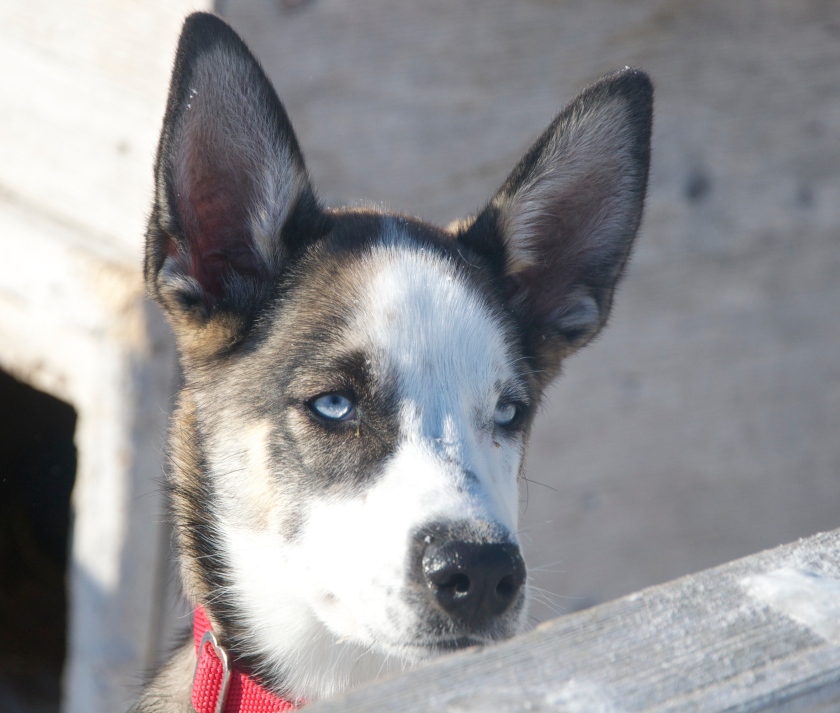 I hadn’t even been there for two days, and already Churchill was doing wonderful things for my bucket list!