After nearly sixth months in Australia, I’m finally hitting the road for some in-depth exploring!

I left Wagga a week ago and took a train to Sydney. I spent a couple of days there, during which I met up with cousin Richard again for a nice lunch, visited the Taronga Zoo, and… the biggest event… bought a car!

It’s a little Subaru Forester that will (fingers crossed) be taking me around Australia for the next five months.

It’s a beautiful little car, good on gas, and I can sleep in the back when I need/want to.

I picked up the car on Thursday from Manly Beach, and then dipped back into the city to pick up some things. Richard very kindly has lent me some camping gear for the next few months, including a tent, sleeping bags, beach umbrella, and road trip guide.

As soon as the car was loaded up, I hit the road!

I was eager to drive in the direction of warmer weather (it’s wintertime here in Australia, and cold down in New South Wales – but it’ll be warmer the further north I go!), and I was also very excited about the car… so the first day, I drove about 400km from Sydney to Crowdy Bay National Park.

I stayed in Diamond Head Campground. It was dark when I got there, so I spent that first night sleeping in the car, listening to the ocean nearby and seeing the stars out my sunroof. Bliss.

The next morning I walked two minutes to Diamond Head Beach:

Watching the birds soar and dive for fish in the early morning:

On my way back from the beach, there was a little family of kangaroos right in the campground. Some Australian kids were patting them as I walked up. I kept a bit more distance (kangaroos have claws!). 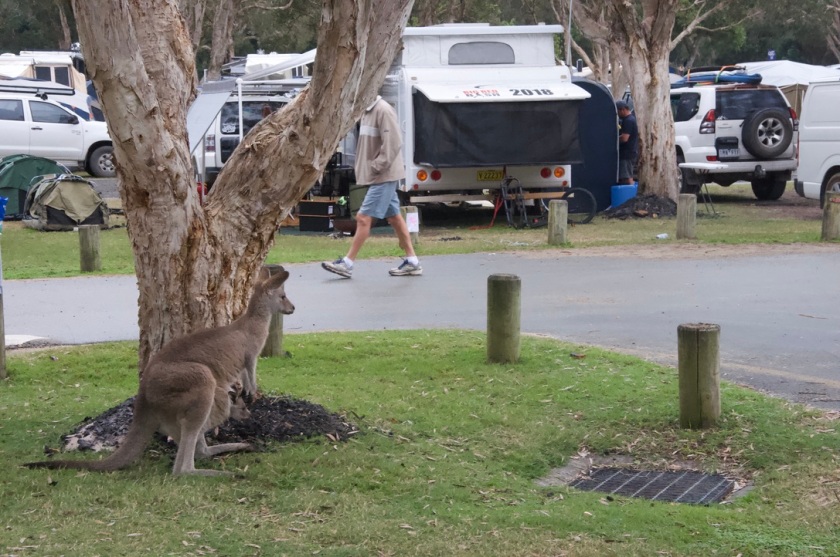 This one had a little joey in her pouch!

The Queensland border is finally open again (it opened on July 10) and my mission is to go up there. I’m heading to Byron Bay (which is in New South Wales), and then going to drive through Brisbane and all the way up to Cairns, with lots of stops along the way.

In light of COVID, I am travelling a little differently than usual. I’m camping as much as possible, rather than hostels (camping is also cheaper). I buy a lot of groceries at a time and then live off them for a few days in my car, so that I minimize going into shops. Most of my activities so far have been hiking and looking at birds, anyway.

Travelling right now may be a little bit different, and require some caution and social distancing, but I’m nonetheless very, very excited.