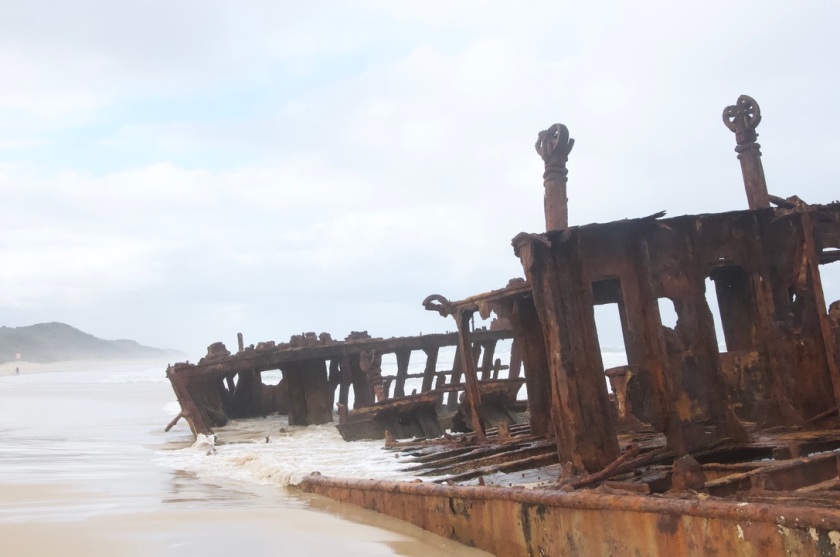 Ok, I’ve fallen a little behind on the blogs – I’ve been too busy lately living!

Time to catch back up…
After spending a full week on Rainbow Beach, it was time for what we’d been waiting for: K’gari, also known as Fraser Island. K’gari, the Aboriginal place name for the island, means “paradise”, and it was pretty darn accurate.

At 120km long, Fraser is the largest sand island in the world, and a popular destination along the east coast. Olivia, Estef, and I joined a “tag along” tour of Fraser. Over three days and two nights, we drove all over the island in a convoy of four all-terrain vehicles. It was a group tour, but with certain restrictions due to COVID (for example, we could socialize with the people in our cars, but were supposed to maintain social distancing from everyone in the other cars).

Driving along the island:

Driving along the empty beach:

Our tour guide told us that normally the island is packed with visitors, but it’s comparatively empty lately due to COVID. The tour company itself stopped operating during COVID and only started up again the week before we were there. Not great for businesses, but kind of cool in a way, that these beautiful spaces are getting a chance to breathe a bit (before continuing to be overrun with tourists like myself).

Our second day included a visit to the Champagne Pools:

These natural rock pools are filled by ocean waves. They get their name because after a wave hits the rocks, and the water is rushing back out, it looks like fizzing champagne:

The Maheno was initially a luxury passenger ship between New Zealand and Australia, before being repurposed during WWI as a hospital ship. As a hospital ship it made several trips across the ocean, including trips to Europe, the Middle East, and Africa. Some time after the war it was sold to Japan for scrap metal, and was being towed there when it was hit by a cyclone. It ended up on the coast of Fraser, where it’s remained ever since; at various times people lived on the ship and there were even weddings there. Now, it lies half-buried in the sand, and waves crash through it during high tides:

Fraser is also famous for its dingo population (this is where the “a dingo’s got my baby” quote is from). Fraser is home to the most genetically pure population of dingoes in Australia. In most other places across Australia, dingoes have interbred with domestic dogs. No pet dogs are allowed on Fraser for this reason.

The first two days on the island, we looked but found no dingoes. I did find lots of dingo footprints across the beach:

Luckily, on our last morning there, we saw a female dingo on the beach, trotting along quite casually. She seemed perfectly unbothered by the cars:

Our guide told us that this is the time of year dingoes have their puppies. This female likely had a den of pups hidden away somewhere, and was looking along the beach for food. Dingoes eat pretty much anything, including fish and anything that smells like humans (i.e., flip flops).

We headed off to the ferry shortly after that. We were a bit early, so we parked the 4WD cars on the beach and everyone got out to stretch their legs. Olivia, Laura (a Fraser friend), and I were sitting on small embankment, happily looking out at the ocean, when somebody called out to us: “There’s a dingo behind you!”

We jumped up and, yes, there was a dingo, walking up calmly behind us:

Our guide had instructed us earlier what to do in case of a dingo encounter. They may be cute and fluffy, but they’re still wild animals. We basically just stood still, stood our ground, and remained calm (good advice for pretty much any wild animal encounter).

There was another dingo further in the trees, as well, and the two of them were both very chilled out. They walked up and down the line-up of cars waiting for the ferry, likely looking for scraps of food or any garbage:

Eventually, the ferry arrived, the dingoes disappeared, and we headed back to the mainland. The island had been incredible, beautiful and wild.