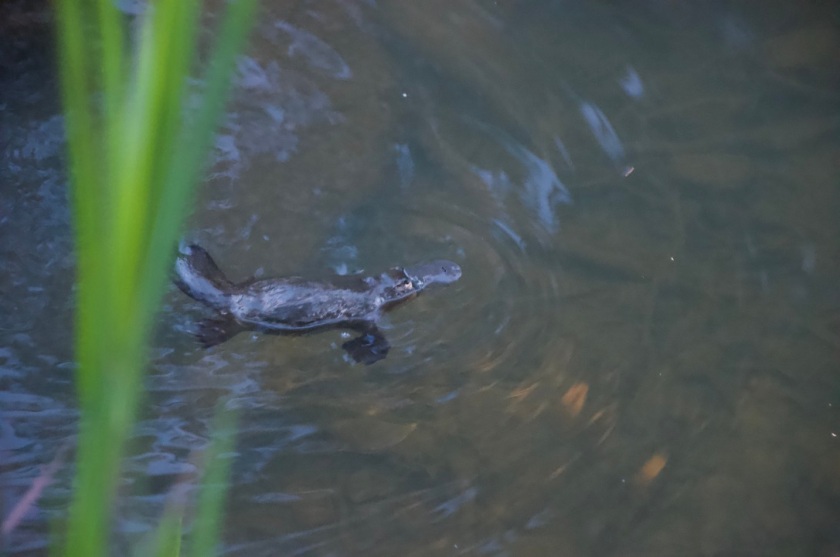 Following Cape Hillsborough, the convoy reunited and headed for another spot just west of Mackay: Eungella National Park. My friend Linda, from Wagga, had told me that Eungella was a good place to try and spot a duck-billed platypus in the wild!

The drive to the park alone was stunning, taking you through a valley full of sugar cane fields and then up into the mountains.

You can see the road we drove up, far below:

View from the top:

Short hike near the lookout point:

We spent the night at the Fern Flat camping ground. The camp ground backs onto a freshwater river, where the platypus are supposed to live. Since platypus are nocturnal, the best time to spot them is dawn and dusk. The first night, we walked along the river as the sun was going down, and lucked out enough to see one! It was a bit dark, so you could mostly just see the shape swimming in the water at that point.

The next morning we all woke up early and sat in various spots along the river, hoping to be lucky enough for another sighting.

Waiting in the early morning for a platypus to appear:

The platypus did not disappoint. As soon as I reached the river, I saw two platypus swimming together. I sat down on the riverbank, waited, and after just a couple minutes a platypus popped up only a few feet away from me:

When my camera made its “click” sound, the platypus disappeared, diving back down into the water. It seemed to be very shy. It would periodically reappear, mostly in the middle of the river or across the other side.

In between surfacing for air, it would have been feeding along the bottom and sides of the river. Platypus use their unique bills to hunt for food in the dark. Their bills are extremely sensitive and can detect the electric fields of nearby living things, such as crayfish and shrimp (their favourite foods).

They’re an egg-laying mammal, they share genes with reptiles, birds, and mammals, and they use electrolocation to hunt for food – they are such an unlikely, bizarre, and truly adorable animal.

The platypus were also a lot smaller than I thought. For some reason I always pictured them as being a similar size to a beaver, but they were half the size, if that – just very petite.

By around eight a.m., the platypus activity on the river had dwindled down. Since the park was so high up in the hills, it was freezing cold, so Estef, Olivia, and I packed up and headed off fairly early in the morning to find some sun. Eungella had been a treat, and I was so, so happy to have finally seen a wild duck-billed platypus – one of nature’s most curious creatures!

““Over Norqauy Pass to Forty-Mile Creek, up that stream and over the pass onto Sawback Creek…”
The luckiest (lazy) little pony. New article out, link in bio!
“In the polar bear capital of the world, volunteers get a glimpse of the frontlines of climate change.” Check out this new article I wrote for Verge Travel magazine, on volunteering & environmentalism in Canada’s north. Inspired by the trip I took the Churchill in 2019 & the beautiful lights I saw there. 🌌 link in bio. #sustainthenorth #churchill #churchillmanitoba #northerncanada #climatechangeawareness #travelcanada #volunteertravel #travelwithpurpose #northernlightsphotos
Latest lockdown orders got you down? Take a virtual trip to the outback with me, as I reminisce about my road trip along Australia's dinosaur trail. Featuring loch ness monsters, waltzing matilda, and epic outback sunsets. 🦕 link in bio
Little known fact about wombats: they make excellent co-pilots. #havewombatwilltravel #wombats #queenslandroadtrip #queenslandtourism #queenslandtravel #travelqueensland #athertontablelands #outbackadventures #outbackqueensland #bananastand #australiaroadtrip #travelaustralia
Watched the movie "Into the Wild" last night and this quote from the opening stuck with me.
When I was travelling around in my car... every item had a place & every space had a function. My favourite thing was falling asleep watching the stars through the sunroof. It's hard to beat the freedom of pulling up anywhere and thinking, "this is beautiful... let's stay just a little longer."
Koala cuddle train.
...and are they ever beautiful 💙🐢#queensland #greatbarrierreef #seaturtle #greenturtle #capetribulation #oceansafari #capetrib #fnq #fnqlife #seeaustralia #thisisqueensland
Loading Comments...
%d bloggers like this: