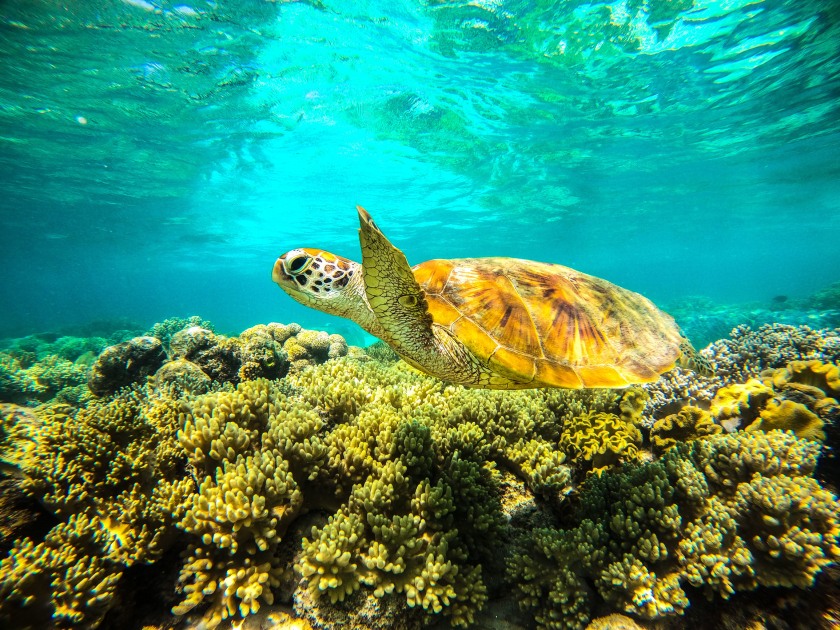 Obviously, one of the highlights of my trip has been seeing the Great Barrier Reef!

The reef is about the size of Germany, and stretches from mid-way up the Queensland coast to well past Cape Tribulation. During these last few months in Queensland I’ve tried to snorkel it as much as possible, across several locations: Airlie Beach/Whitsundays, Magnetic Island, Cairns, Port Douglas, & Cape Tribulation. Of all of them, my favourite spot was definitely Cape Tribulation.

Although it was beautiful snorkelling in all of those locations, Cape Trib was the winner for a lot of reasons – the coral was very colourful here (in other places, much of the coral is bleached. I’m told that even in Cape Trib, the coral isn’t as colourful as it used to be). The visibility was amazing, as was the wildlife; and the reef shelf is so much closer to Cape Trib than it is further south, meaning that it’s just a half hour boat ride to get to Outer Reef locations (vs. a two-hour boat ride from Cairns).

The reef was amazing – I don’t think I can say that enough. It was honestly like seeing a whole other, underwater world.

We got suited up with stinger suits, masks, fins, and pool noodles (so that you can float around leisurely without worrying about accidentally touching the reef, which would both damage the reef and be painful to you). I got in the water, swam for about thirty seconds, and then someone from the boat yelled out: “Hey, you with the yellow pool noodle!” (That was me). “There’s a turtle in front of you! Swim ten feet to the left!”

It was maybe the most beautiful thing I’ve ever seen:

I moved very slowly, just floating through the water beside her and giving her lots of space (the sea turtles there don’t care too much about snorkellers, so long as you don’t move too fast or get right up in their faces). She swam slowly along, nibbling on seagrass, glancing at me every now and then, and coming up for breaths of air. She let me hang out with her for about ten minutes, and then I let her disappear into the blue, to enjoy the rest of her day in peace:

And the manta rays! The difference between them and sting rays is that sting rays are almost perfectly round, whereas the manta rays have a much more pointed shape (as seen in this picture):

The rays like to bury themselves in sand. Hidden from view, they then wait for a tasty fish to swim by. They do this a lot particularly in shallow waters and around beaches. Whenever you’re walking through shallows water around here you have to watch out that you don’t accidentally step on one (and out on the reef, this is another great reason not to step on anything – even if it looks like soft sand, you never know what’s going to be underneath!). This manta ray was just partially hidden by sand:

Both sting rays and manta rays have a stinger that they’ll use to defend themselves. But – like most sea creatures – they won’t bother you and are quite peaceful, so long as you give them lots of space.

Also on the reef were so, so many colourful fish:

The coral itself was gorgeous, and so varied. We did our first snorkel in a section with primarily “hard” coral. Afterwards we moved to a second, nearby location and had another snorkel in a soft coral garden.

A mix of soft and hard coral:

It’s one of those tourism destinations that you’re now trying to see before they’re gone. The waters around the reef are warming and the Great Barrier Reef has heartbreakingly passed the point of no return. For now, at least, it’s still beautiful; and it’s something I’m very, very glad to have seen.